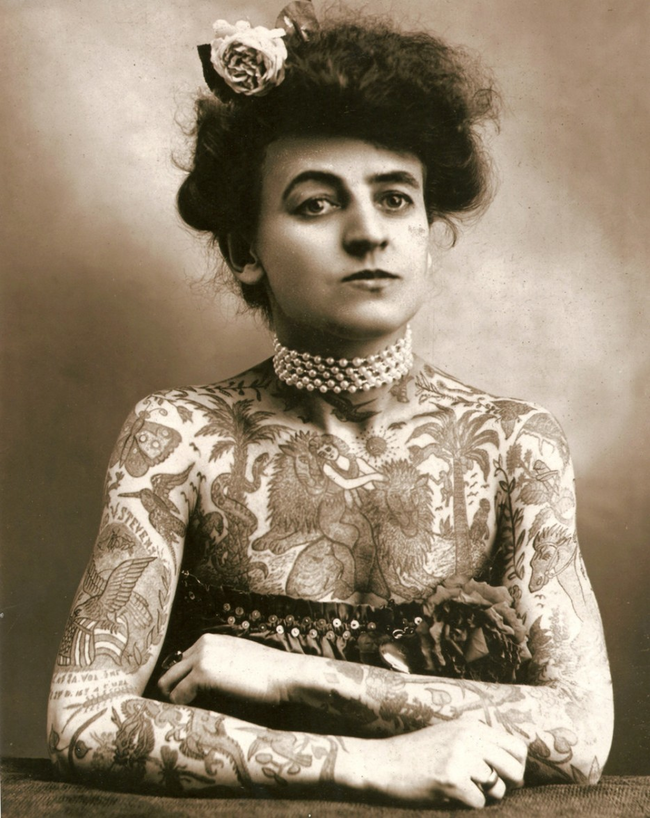 1. Otzi the Iceman (circa 3300-3200 BC) has the oldest preserved tattoos. He has 61 total tattoos including a black cross on the inside of his left knee, six straight lines on his lower back, and parallel lines on his ankles, leg, and wrists. Scientists discovered joint disease the tattoos after X-raying Otzi, which suggests the tattoos were meant to relieve pain.

2. The earliest tattoos that incorporated a specific picture, rather than just an abstract design, were found on Egyptian mummies dating from 400 BC. The tattoos depict Bes, the god of revelry, on the thighs of dancers and musicians.

3. King Harold II of England’s body was identified by his several tattoos after the Battle of Hastings in 1066. The most notable tattoo being the words “Edith and England” on his chest.

5. The first professional tattoo artist in the United States, Martin Hildebrandt, a German immigrant who came to Boston in 1846.

6. Inventor of the electric tattoo machine, Samuel O’Reilly, based his 1891 design on the autographic printer, an engraving machine invented by Thomas Edison.

7. Tattoos became popular among European royalty after future King George V gets a Cross of Jerusalem tattoo in 1892. Tattooed royalty included King Frederick IX of Denmark, Kaiser Wilhelm II and Tsar Nicholas II of Russia. Even Queen Victoria was rumored to have one.

8. Maud Wagner (pictured) was the first female tattoo artist in the US. Before tattooing, she was an aerialist for the circus. During the 1904 World’s Fair, she met her future husband, tattoo artist Gus Wagner. She agreed to go on a date with him in exchange for a lesson in tattooing.

10. Winston Churchill’s mother, Lady Randolph Churchill (1854-1921), had a tattoo of a snake around her wrist, was covered with a bracelet at formal occasions. Churchill himself had an anchor on his forearm.